These simple songs below are easy to play by ear using the chart below in the Key of C.   The Key of C is the simplest key in which to play because all the notes are white keys.  (However, these same numbers can be used in any key once one knows the appropriate scale in that key. )   Read just the RED with the chart under it for FAST TRACK. 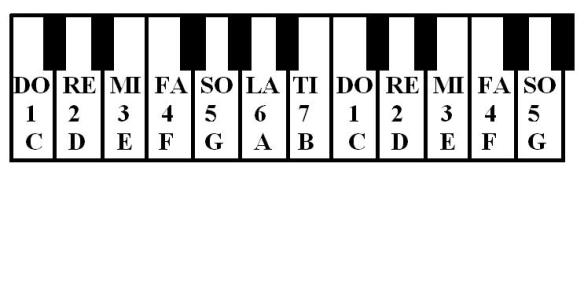 Even very young children, possibly as young as four year olds can be taught these songs, if an adult demonstrates for them.  They may not understand all the theory but they do understand numbers.   Just make sure they keep their hands in the correct positions:

NOTE ON TIMING  No timing is notated in these songs, but most children or at least the parents should know some of these classic or traditional songs.  The numbers played will produce the MELODY of the song.

To simplify the chords for children,  just keys 1+5 can be used played with the pinkie and the thumb.  1+5 played together is called a BLOCKED FIFTH (INTERVAL).  Technically, this is not a chord, for a chord is made up of three notes, but is called a “C suspended.”

To simplify this, and to play without changing hand positions, we can play just 2 + 5.

Another option, if you prefer, as harmony can be varied within certain rules, is to play a SEVENTH with the DOMINANT CHORD.    The easiest way to do this for children is to play just 4+5 together.  So, in the Key of C, this would be a shortened G7 Chord, g+ f or for an INTERVAL of a  SECOND.   (Please see this page for an understanding of INTERVALS.)

Suggestion: Print out on bright paper with “landscape” printing orientation for children.