HOW TO SPOT A WOLF IN SHEEP’S CLOTHING

Our last lesson, we learned that Yeshua the Messiah (Jesus Christ) is the only way into the sheepfold of the Good Shepherd. In other words, you can’t be one of God’s little sheep, if you don’t follow Yeshua!

But someone might come into a church meeting or a church building who isn’t really a sheep. While we call the building we meet in, a “church”, too, the real “church”, the real “sheepfold” are God’s people, “the sheep of His pasture”. 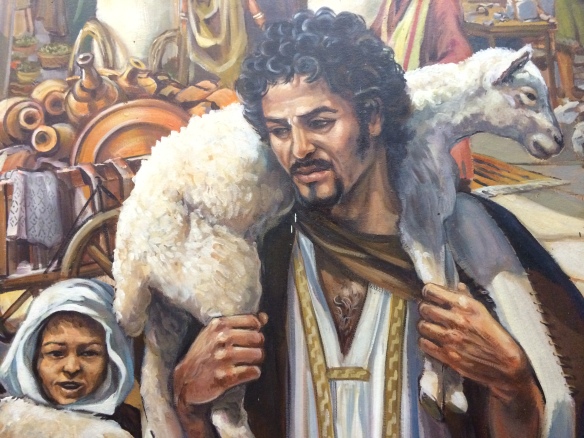 from a wall painting in Jerusalem

Yeshua spoke this as a warning to His sheep:

“1 Truly, truly, I say to you, he who does not enter the sheepfold by the door but climbs in by another way, that man is a thief and a robber. 2 But he who enters by the door is the shepherd of the sheep. 3 To him the gatekeeper opens. The sheep hear his voice, and he calls his own sheep by name and leads them out. 4 When he has brought out all his own, he goes before them, and the sheep follow him, for they know his voice. 5 A stranger they will not follow, but they will flee from him, for they do not know the voice of strangers.”

You see a robber will not go through Yeshua (the door), but will sneak in. He may want to snatch away a little lamb from God’s fold. While God’s sheep know His voice, perhaps little baby lambs could be led astray, those who haven’t yet learned to recognize the Good Shepherd’s voice.

The Good Shepherd’s voice is learned by reading the Word of God and praying.

Yeshua loves His sheep but a thief does not!

“I came that they may have life and have it abundantly. I AM the Good Shepherd. The Good Shepherd lays down His life for the sheep.” (John 10:10, 11)

That’s a word picture of our loving God and Savior.  But others are not loving at all nor are they God.

“10 The thief comes only to steal and kill and destroy. 12 He who is a hired hand and not a shepherd, who does not own the sheep, sees the wolf coming and leaves the sheep and flees, and the wolf snatches them and scatters them. 13 He flees because he is a hired hand and cares nothing for the sheep.”

Hired hands, thieves, and wolves care only about themselves. They are selfish. They want your money. They want to be famous. They do not care about you at all.  But they may say something nice to trick you into thinking they care!

Here is another warning from Yeshua, the Good Shepherd:

“Beware of false prophets, who come to you in sheep’s clothing but inwardly are ravenous wolves. You will recognize them by their fruits…” (Matthew 7:15-16)

Here Yeshua is talking about false teachers and false leaders. Yes, some robbers are so tricky that they become pastors and teachers and church leaders!

How can we tell they are false?  “You will recognize them by their fruits…”

False prophets don’t show the real fruits of the Spirit: real love, real joy, real peace, real patience… (See Galatians 5:22-23 and our lessons on the fruit) But they might show some “fake fruit”, some false “love” to trick you.  They might pretend to really care but it’s just on the surface. It’s not real at all.  Sadly, people who have never known true love are often fooled by fake love!  That’s why it’s important for Christians to share and show the real love of God! Real love gives and sacrifices for others. (See our lesson on Love)

THE FRUIT OF THEIR LIPS

Also, the “fruit of their lips” of false prophets does NOT agree with the Word of God! See how important it is to know the Word of God?! How can you recognize falsehood if you don’t know the Truth?

There are whole “churches” that are being misled by false teachers! These false teachers will say that Yeshua is not God come in the flesh. But the Word of God says differently! The whole Bible points to Yeshua the Savior as being the Creator-God!

The antichrist is someone who is disguising himself as the savior! Since he wants people to follow him, he must get you to stop following Yeshua! He will say that Yeshua is not God! Oh, he might cunningly agree that Yeshua is the Son of God, meaning we are all sons of God, but he will not say that Yeshua is God!  But Yeshua claimed to be God, calling Himself, “I AM”!  (John 8:58)  And Yeshua’s very name means “YAH saves” . (Lesson on Yeshua being God)

Yeshua promised us that He would come again.

Since soon after Christ rose from the dead, there have been false prophets in the world. Even now, there are some who are going around and claiming to be the Second Coming of Jesus! There’s one who lived right nearby in Sugarland, Texas. He had over a million followers! These false “christs” might even call themselves “Jesus”! But they just want money and fame or are plain crazy or worse – they are controlled by demons. We know that they are false because Yeshua told us:

“23 Then if anyone says to you, ‘Look, here is the Christ!’ or ‘There he is!’ do not believe it. 24 For false christs and false prophets will arise and perform great signs and wonders, so as to lead astray, if possible, even the elect. 25 See, I have told you beforehand. 26 So, if they say to you, ‘Look, he is in the wilderness,’ do not go out. If they say, ‘Look, he is in the inner rooms,’ do not believe it. 27 For as the lightning comes from the east and shines as far as the west, so will be the coming of the Son of Man. … “  (Matthew 24)

So if someone invites you to a meeting of someone who is claiming to be the Second Coming of Christ, Yeshua says “Do not believe it!”  It couldn’t be the real Christ!  Here’s why:

“29 “Immediately after the tribulation of those days the sun will be darkened, and the moon will not give its light, and the stars will fall from heaven, and the powers of the heavens will be shaken. 30 Then will appear in heaven the sign of the Son of Man, and then all the tribes of the earth will mourn, and they will see the Son of Man coming on the clouds of heaven with power and great glory. 31 And He will send out His angels with a loud trumpet call, and they will gather His elect from the four winds, from one end of heaven to the other.”   (Matthew 24)

When Yeshua returns the second time, He is coming as the mighty King of Kings! It will be the BIGGEST EVENT in human history. It will be unmistakeable! People all over the world who haven’t followed Yeshua will mourn. Those who have known Yeshua as Messiah and LORD will be joyously gathered to Him in the air!  (1 Thes 4:17)

Don’t walk by sight!  That means don’t always trust what you see with your eyes. Walk by faith in Yeshua and His Word!   When He returns, He will gather His sheep to Himself from all over the world into the air!

Children of God, dear sheep of His pasture, beware of false teachers and flashy delusions.

Here is another Scripture on the Second Coming, our “blessed hope”:

“9 After He said this, He [Yeshua] was taken up before their very eyes, and a cloud hid Him from their sight. 10 They [the apostles] were looking intently up into the sky as He was going, when suddenly two men dressed in white stood beside them. 11 “Men of Galilee,” they said, “why do you stand here looking into the sky? This same Jesus, who has been taken from you into heaven, will come back in the same way you have seen Him go into heaven.”  (Acts 1)

But this next time, maybe soon, “all the tribes of the earth … will see” Yeshua come with “with power and great glory”!!   Are you ready?