Copy this drawing for your students as .pdf : ShekinahBW

Every Palm Sunday, we pass out pictures of Jesus (Yeshuah) sitting on a donkey.  But it wasn’t one donkey.  There were two: a donkey and a colt!  He sat “on them”!  This is how I imagined the Messiah sat.   This agrees with a vision of a pastor* I know.

The two donkeys are also there in the Hebrew Bible:

“Rejoice greatly, O daughter of Zion; shout, O daughter of Jerusalem: behold, your King comes to you: He is just, and having salvation; lowly, and riding on an ass, and on a colt the foal of an ass.”

The gate in the picture represents the eastern gate, the “Golden Gate”, and also called the “Gate of Mercy”.

Yeshuah, 2000 yrs ago, passed through an eastern gate during His “Triumphal Entry” into Jerusalem.  The Jews had palm leaves and cried to Him, “Hosanna!”  The people considered Him their King!  They knew that their King would be descended from King David as it was prophesied or foretold.

“And the multitudes that went before, and that followed, cried, saying, Hosanna to the son of David: Blessed is He that comes in the name of the Lord; Hosanna in the highest.” 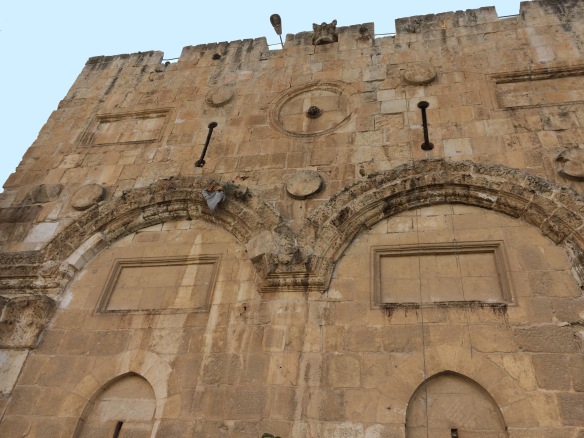 The eastern gate has been rebuilt but the current one has been closed since medieval times.  Probably Sultan Suleiman, a Muslim, thought that it would prevent the Prince of Peace, Yeshua, from returning to Jerusalem!  But Yeshua will return!  It is His promise!

Be sure to see my video:  “Listen, Children” (based on Deuteronomy 6:4).  Lyrics

Be sure to see my video/song “Wing It!” About the Oil Painting:  “Shekinah”

This represents Yeshuah the Messiah leading us into the glory of God, the “Divine Presence” or “Shekinah”.  When we believe in Jesus Christ, Yeshuah, for salvation, through His love for us, and through the blood which He spilt for us, He will lead us to the Shekinah!

According to Wikipedia, and according to Jewish tradition, the “Shekhinah” or Divine Presence would appear through the Eastern Gate.  It will appear again when the Messiah comes again.

You may order prints of this painting through:

These are the pictures my grandchildren did: