You can read Granny Vee’s story below online for free (just scroll down) or purchase as a real book.

PURCHASE OTHER CHILDREN’S PRODUCTS AND MUSIC

HELP “FRIENDLY PHIL THE FROG” TEACH the GOLDEN RULE and leave a GOLDEN LEGACY! This lesson could make a difference in a child’s life.  These books make great gifts to schools, daycares, and libraries.

(The pictures are the same in this online presentation but the fonts are better in the  book!  Also, there are more pictures.)

AND NOW FOR OUR STORY……

Note:  INTERACTIVE!  Children enjoy  doing the “Moans”, “Groans”, and “LA-LAs” themselves as sound effects!  Also, see our Word Tips at the end for some definitions.

Friendly Philemon Frog, or “Phil” for short, was a Striped-Belly Green Frog. One day Friendly Phil was leaping along singing a cheery little song: 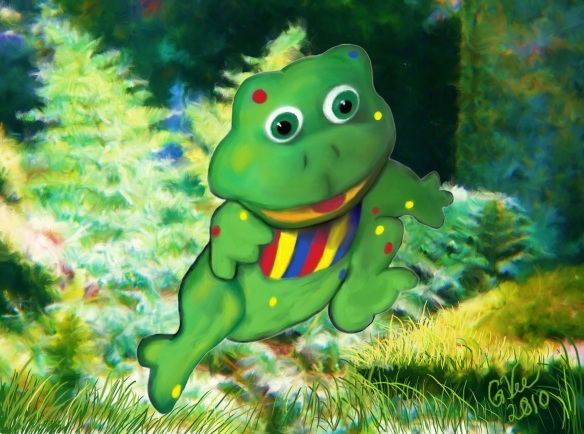 Phil was happily and hurriedly leaping along. Happily because he was going to meet his friends to play baseball. Hurriedly, because he was a bit late. “Boy, oh boy! I positively can’t wait to get to the ballgame!” thought Phil. But on this particular day, he first happened to bump into an old toad named Thaddeus. Now Thaddeus Toad, at one time, had been a world-class jumper. He could leap over a big old moose with just a single bound, a pretty hard feat for a toad. 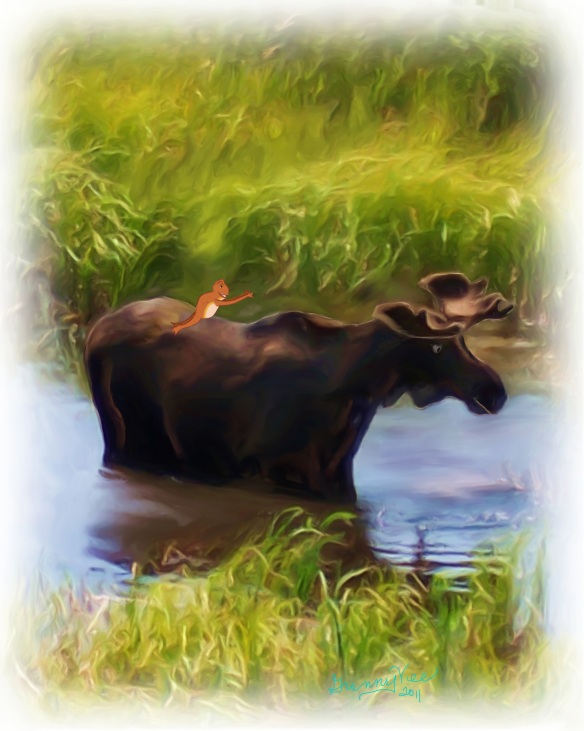 Of course, there are other animals that can jump higher than toads. Do you think you can name some? 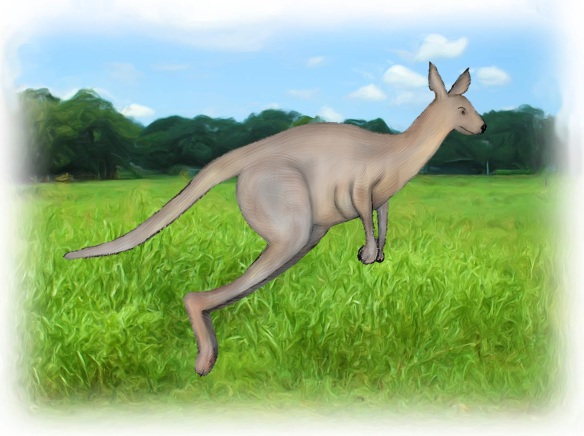 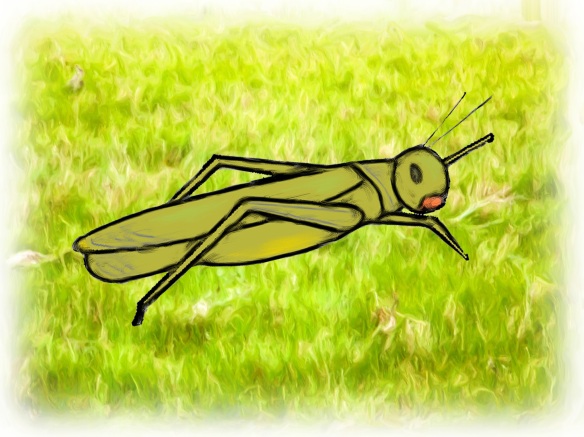 Grasshoppers?! Grasshoppers can’t hop higher than toads, can they? Yes, some can! Who would believe?!

But let’s get back to our story! On this particular day, Thaddeus Toad was moaning and groaning.

Thaddeus Toad was moaning because he was hurt. His left leg muscles ached so much that he couldn’t leap – not one little bit. So there he lay moaning in a pile of brown and orange autumn leaves. And because he, too, was brown and orange, it was very hard to see him without looking very carefully! Why earlier a hiker had almost stepped on him by accident! Thaddeus had shuddered, imagining himself being squished under the big heavy boot. It had been a very close call, a very close call, indeed! Yes, Thaddeus Toad knew he needed someone to help him. So he moaned and groaned.

But no one heard him. He was getting very hungry there, too. Not one bug crawled close enough for him to snatch it with his long tongue. Not one fly flew near. Thaddeus longed to be back home by the pond where there were always lots of bugs to eat. So he moaned and groaned.

Then the toad heard the leaves rustling. His little heart started pounding

with the hope that someone had come at last to help him. Suddenly, a bushy-tailed squirrel ran right by him!

croaked the toad. The deep voice startled the skittish squirrel and he stopped and looked around to see if he was in danger. At first, the squirrel didn’t see the toad who blended in so well with the leaves.

croaked the toad. The squirrel finally saw the brown and orange toad almost buried in all those brown and orange leaves. “Sorry. No time to help. I am very, very busy. You see I must collect all my food for the winter. Sorry.” And with that the squirrel darted off. Sadly, he wouldn’t even take the time to help the poor, crippled toad. So Thaddeus Toad went back to his moaning.

Then the toad heard the leaves rustling again. His little heart started pounding

with the hope that someone had come at last to help him. Slowly, a snake slithered towards him. 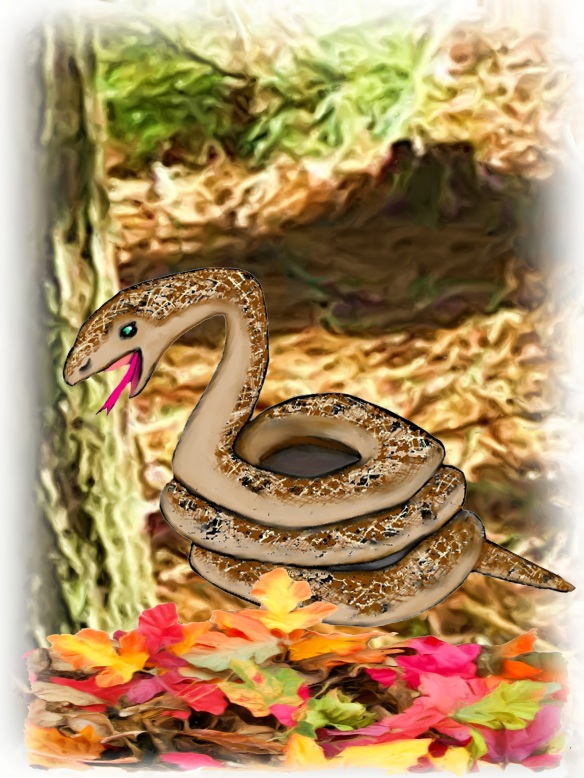 croaked the toad. “Hello!” hissed the snake. You look as if you can’t leap.” “I can’t!” said Thaddeus. “Please, can you help me get back to the pond where I can find some bugs to eat? I am soooo hungry!” “You just stay right there and I’ll see what we can do about a little dinner,” hissed the snake. But the sneaky snake was not really planning on helping Thaddeus at all. Actually, the snake was planning on eating the poor toad! The snake slithered dangerously close to Thaddeus.

Suddenly a beautiful eagle swooped down from the sky and caught the snake. 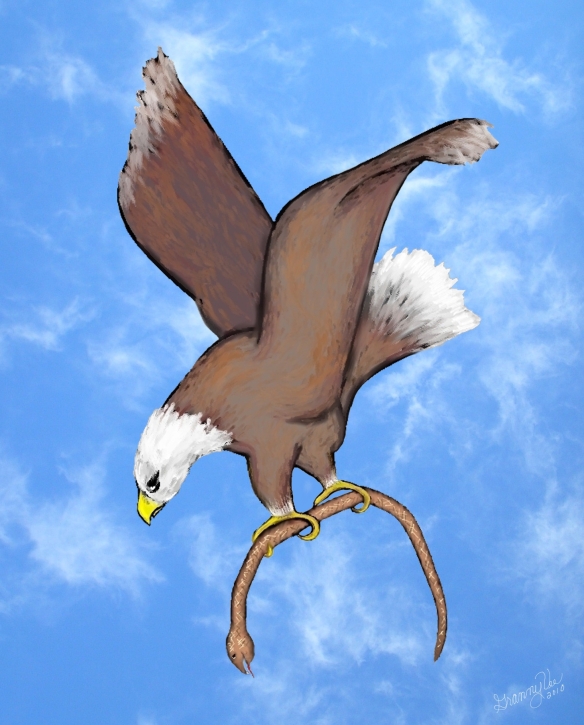 “Whew! That was close!” croaked the toad. He breathed a little prayer of thanks. Just then the he heard something. It was someone singing in the distance.

“Hmmm. That sounds like a frog voice to me,” thought the toad out loud. “And it sounds a lot like Phil the Frog! He’s always singing that cheery little song! Why I can hear him sometimes clear across the pond. Maybe he’ll help me. But then again, maybe he won’t. Sometimes those Striped-Belly Green Frogs don’t like us Brown and Orange Speckled Toads. But then again, that is Friendly Phil the Frog. If he’s truly friendly, he will help! Won’t he?” Phil was leaping quickly along singing quite loudly.

“How will he even hear me?” thought Thaddeus. “He’s singing at the top of his lungs! I got it! If I sing louder than he’s singing, he just might hear me.” So the toad started singing as loudly as he could.

And guess what? Friendly Phil did hear him! Phil leaped closer and closer towards the sound of the singing. He stopped and listened. The old toad continued croaking out the chorus.

Phil looked around but he couldn’t see the toad because he blended in with all the orange and brown leaves! “Positively peculiar!” remarked Phil. “I don’t see anyone. Maybe it was only an echo of my own singing. It was certainly a deep echo, though…. hmmm …. maybe the leaves are singing!” “Of course, the leaves aren’t singing!” bellowed the toad. “Can’t you see me here in all these leaves?” The toad waved his arms to draw attention to himself and the leaves flew up in a flurry of fall colors. “Oh, it’s you! Why it’s Thaddeus Toad! Positively peculiar!” exclaimed Phil. “Just what’s so peculiar?” croaked the toad. “I’ve never heard of a singing toad!” replied Phil. “You all do a lot of croaking, but I’ve never heard one ‘la-la’ out of you … or from any toad for that matter.” “Well, of course, toads sing!”

“See?” Thaddeus Toad chimed. “But ‘la-las’ are not particularly our style. However, now that I’ve tried it, I kind of like it!  It’s rather catchy.”

“But now to the matter-at-hand,” continued the toad. “I am sooooo glad you’re here! I hurt my leg and I can’t leap and I’m sooooo hungry! Do you think you can help me? Please?”

replied Friendly Phil who was almost always ready to help a friend in need. But then Phil remembered that he was late. “I’ll miss my ballgame!” he thought. “Who will play second? What should I do? I want to go play. But what if it were me lying there hurt? Wouldn’t I want someone to help me?”

Phil was torn. He really wanted to play ball but he knew in his heart that the right thing to do was to help this poor, crippled toad. So Phil decided to be kind.

said the green frog.  “I’ll be glad to help. I’ll start by catching you a snack!” So Friendly Philemon Frog darted off to catch a fly for the hungry toad to eat.

The toad was ever so grateful for the juicy morsel. “Yummm!” Next, Phil called on his friend the Bard Owl to come and bandage the toad’s sore leg. 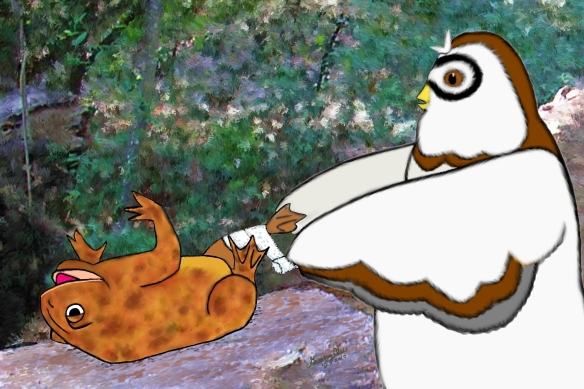 Then Phil helped the old toad stand up. Thaddeus leaned on Phil and together they slowly made it back to the toad’s home near the pond. Afterward, Phil came every day with flies for the toad to eat until his leg was healed and he could catch them for himself.

Meanwhile, Phil and Thaddeus became good friends and together they would sing in two-part harmony: 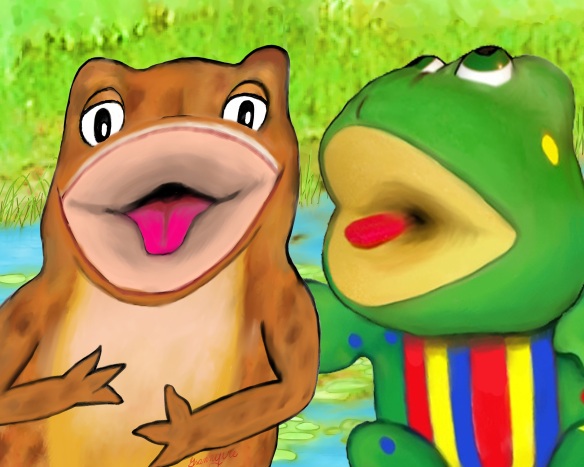 One day, when Phil was approaching Thaddeus’ home, he could hear a lot of croaking.

Many, many toads were leaping around Thaddeus. Phil wondered about all the excitement. He was a little worried because it was rumored that Brown and Orange Speckled Toads didn’t particularly like Striped-Belly Green Frogs. Every time Phil had come to this side of the pond, he had wondered if the toads would chase him away. But today to his surprise, as Phil hopped closer, the toads all started cheering happily. Then one of the Brown and Orange Speckled Toads, the biggest one, jumped towards Phil. For a second, Phil was worried. But then the big toad smiled broadly. “Friendly Philemon Frog!  It is an honor to finally meet you,” said the big toad who was wearing a crown. “We have heard of your great kindness towards Thaddeus Toad in helping him while he was hurt.” “Hey, what are friends for?” Phil shrugged off the compliment. “I was only doing what I would have wanted someone to do for me, if I had been in the same predicament.” “Well, nonetheless, as the Toad King, I would like to present you with this token of our appreciation,” continued the big toad.

He pulled out a heart-shaped gold medal. He placed it on Phil’s chest. “We present you, Friendly Philemon Frog, with this Gold Heart award because you followed the Golden Rule: ‘Treat others as you would like them to treat you!’   You truly have a gold heart on the inside! By helping a toad in need, you put the Golden Rule into practice and have set a good example for all toads and frogs everywhere to follow. We all would be honored to have you as our friend.” So from that day forward, the Brown and Orange Speckled Toads and the Striped-Belly Green Frogs lived happily together as friends sharing the same pond. They learned to croak and sing in beautiful harmony together.

And that’s how the Green Frog got his Gold Heart. He kept the great and good Golden Rule:

“Treat others as you would like them to treat you.”

PURCHASE OTHER CHILDREN’S PRODUCTS AND MUSIC

feat = accomplishment, something great one does  (Not to be confused with the “feet” you use to walk!)

harmony = in music, sounds that sound good together.   Also, when people get along well with one another, they can be said “to be living in harmony”.

speckled = spotted or dotted or freckled