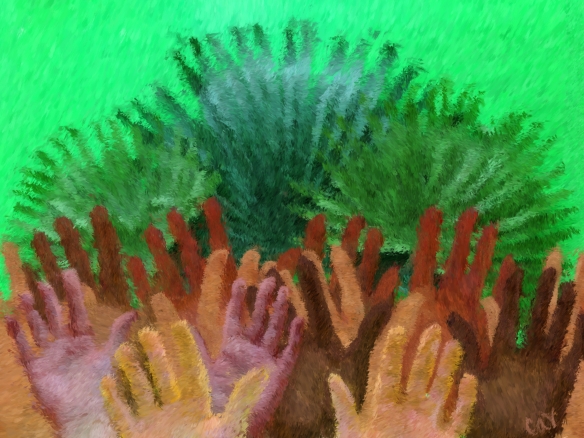 Wise Words from the Best Book

“Hosanna to the Son of David! Blessed is He who comes in the name of the Lord!  Hosanna in the highest!”

“And the crowds that went before Him and that followed Him were shouting, ‘Hosanna to the Son of David! Blessed is He who comes in the name of the Lord!  Hosanna in the highest!’”

Let’s go back over two thousand years ago to the country of Israel.  Jesus Christ had been preaching, doing miracles and healing many people in Israel for over three years.  In Israel, Jesus  was called by his Hebrew name ‘Yeshua’* which means “YAH saves”.

One day, before the feast of Passover, the crowds in Jerusalem were so very excited! Yeshua, was coming into their city!

This is the gate through which Yeshua came into Jerusalem on Palm Sunday.  Of course, it was not sealed up then as it is today.  A jealous leader closed it some years after Christ because he thought it would stop Yeshua from returning again as the King of Kings!   Little did he know that by closing it, he was fulfilling prophecy!

“This gate shall be shut; it shall not be opened, and no man shall enter by it, because the Lord God of Israel has entered by it; therefore it shall be shut. Only the prince may sit in it…”  (Ezekiel 44:2-3)   Yeshua is the Prince of Peace!

Many of these people in the crowds of ancient Jerusalem, had come to greet their King.   They believed that Yeshua was indeed the Messiah, the Savior that YAH had promised to Israel.   So they shouted “Hosanna!” which was a way to praise God. It means “Come, save!”  to Him whose very name meant “YAH saves”!

YAH had promised King David many years before that the Messiah to come would be his descendant.   And indeed Yeshua was a descendant of King David!  (Matthew 1)  So the crowds in Jerusalem called Him the ‘Son of David’.  They also knew that this ‘Son of David’ would set up an everlasting kingdom (Daniel 7:13-14), a kingdom that would NEVER end!  So they greeted Yeshua as their King and Savior, waving palm branches and shouting:

“Hosanna to the Son of David! Blessed is He who comes in the name of the Lord!  Hosanna in the highest!”

In that crowd that day, which we now call “Palm Sunday”, were many children!  The children, too, were praising Yeshua!  They were happily waving palm branches and shouting ‘Hosanna!’  The people and children gladly followed Yeshua through the streets of Jerusalem and right into the temple.

At the temple, Yeshua first chased out some people who were selling things there.  The temple was a special place, a holy place, a house of prayer, not a place to be doing business!

Then Yeshua began healing the blind and the crippled! He did ‘wonderful things’ for the people because God is love!

God is still very pleased today when children praise Him! We may not have palm branches but we have the palms of our hands  to lift up to Him!  Let us sing to Yeshua “Hosanna!”  He saves us!  He took away our sin as the Lamb of God on the cross.  He saves us from the dark kingdom.   Because of Yeshua the Messiah, we can live in His everlasting kingdom of “righteousness, peace and joy”!  (Romans 14:17)  That’s a good reason to shout:

“Hosanna in the highest!”

Be sure to check out Granny Vee’s videos “Listen, Children!” and “Wing It!”  and the “Glory to God” coloring page, (towards the bottom of the page.)