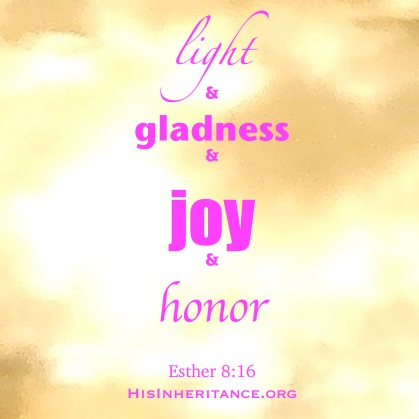 “Light and Gladness, Joy and Honor”

“The Jews had light and gladness, joy and honor”

In this lesson, we will continue the story behind the holiday of Purim from the Book of Esther.    This holiday celebrates the victory the LORD gave to His people, the Jewish people, over their enemies.

We learned that God had put Queen Esther in the right place at the right time for a special purpose.

(Read LESSON 8 for the beginning of the story.)

Well, Esther did decide to risk her life for her people.  The evil ruler Haman had hatched a plot to kill them all.  Esther would ask the king for his help to save the Jews.  But with such an important request, she wanted to be absolutely sure to ask the king properly.  Esther wisely asked her cousin Mordecai to ask every Jew to pray and fast for her for three days.  She would do so as well. (Fasting is when one skips doing something, even eating, in order to spend more  time praying and listening to the LORD.)

Beautiful Esther entered “the inner court of the king’s palace”, then she stood waiting meekly for the king to invite her in further.

“When the king saw Queen Esther standing in the court, she won favor in his sight.”  The king said to her, “What is it, Queen Esther? What is your request? It shall be given you, even to the half of my kingdom.” (Esther 5:1-3)

Wow!  What an answer from the king!   That answer meant that the king would do almost anything in his power for her.  But Esther still waited.  She did not just blurt out her request to save the Jews even then.   Instead, she invited the king to a banquet that day! She also invited the evil Haman to join them. Why did she invite this wicked ruler?  We’ll find out.

At that banquet, Esther again did not immediately ask the king for his help… not yet.   Instead, she invited the king and Haman to a second banquet the next day.  Why didn’t Esther just ask the king for his help then?   Esther was waiting for the right time.   The Holy Spirit was guiding her after all that prayer and fasting!   Perhaps in her time of prayer, God had showed Esther exactly what to do.  The Holy Spirit was having Esther wait for good reason.  Often we need to wait patiently on God’s perfect timing.

A very important event was going to happen in that time of waiting.  The king couldn’t sleep that night.  I’m sure the Holy Spirit had something to do with that as well!  The king started reading some old records and found out that Mordecai had once saved the king’s life yet Mordecai had never been rewarded.   The king wanted to honor Mordecai!

Meanwhile, the evil Haman (Boo!) is planning to kill Mordecai!   Evil wants to destroy good!   But God always plans to reward good!  Will Haman succeed in his evil plan to hang Mordecai?

Before he could carry out his wicked plot against Mordecai, though, Haman must attend Esther’s second banquet.  So “the king and Haman went in to feast with Queen Esther.”  “The king again said to Esther, “What is your wish, Queen Esther? It shall be granted you. And what is your request? Even to the half of my kingdom, it shall be fulfilled.”

Then Esther answered, “If I have found favor in your sight, O king, and if it please the king, let my life be granted me for my wish, and my people for my request.  For we have been sold, I and my people, to be destroyed, to be killed, and to be annihilated.”

Then the king “said to Queen Esther, “Who is he, and where is he, who has dared to do this?”  And Esther said, “A foe and enemy! This wicked Haman!”

So now we see why Haman had been invited to the banquet.  Esther accused him face to face before the king, and the king knew that the Jew Mordecai had saved his life!  “Then Haman was terrified before the king and the queen.” (Esther  7:1-6)

Well, it ended up that the king was so very angry at the evil Haman’s plot that the king ordered him executed.  Haman was hung immediately. All that he owned was given to Queen Esther.  Mordecai was given royal robes and honored by the king!  See how God can turn the tables  on evil!   Evil will always lose in the end.  We know that the Bible tells us  that evil will be defeated and the devil will be locked up.

The evil Haman was gone but his plot to kill the Jews was still active.   Hateful people had already been stirred up to kill the Jews.   What could be done to stop them?  The king gave Mordecai the right to pass a law stating that the Jews could protect themselves.   The law was published all over the country.  The Jews celebrated.   They knew that Yahweh would give them victory and help them in their fight for their lives.   And He did!  But the Jews celebrated even BEFORE their victory happened, confident in their God!

“The Jews had light and gladness, joy and honor”

This great confidence and joy in their God to protect them pleased the LORD.  It also caused their enemies to be fearful.  Many other people were inspired by the Jews to follow the One True God, the God of Israel, Yahweh.

Today, the joy and confidence we have in our loving God can inspire others to follow Yeshua, Jesus Christ.   God doesn’t want us to be fearful of anyone or anything.   We can celebrate that God gives us the victory.  The victory is in Jesus.   We may lose a baseball game.  We may have accidents.  People may be mean to us.  We may have big problems.  God can help us in everything and through everything to live lives of victory!  And in the end, believers in Yeshua will live forever in His Kingdom of  “righteousness, peace and joy”!  So let’s celebrate!

LORD, please help us also to live our lives with light and gladness, joy and honor  knowing that You are “working all things together for our good”!  (Romans 8:28)  May our lives bring glory to You!  Amen!

“Enter His gates with thanksgiving, and His courts with praise! Give thanks to Him; bless His name!”